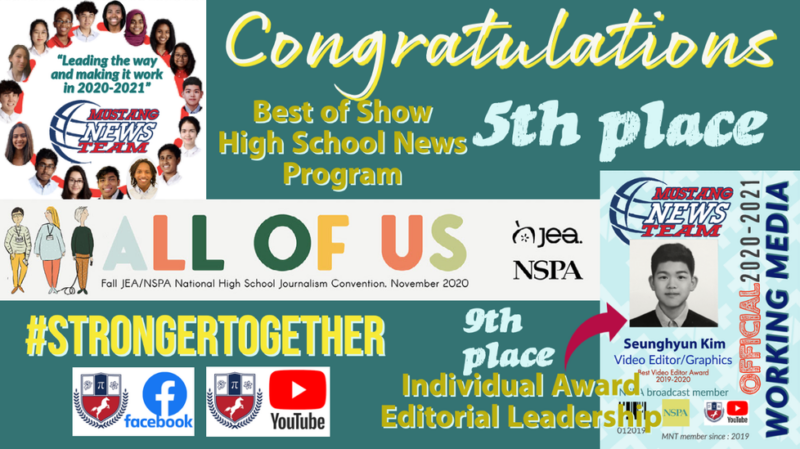 The conference theme this year was “All of Us”. Our school’s news team walked away with the 5th place spot in the Best of Show-High School News Broadcast Program.

Congratulations to Mustang News Team for this wonderful achievement! Way to go!

Special thanks to Mrs. Rookmin Maharaj for her leadership with the Mustang News Team! 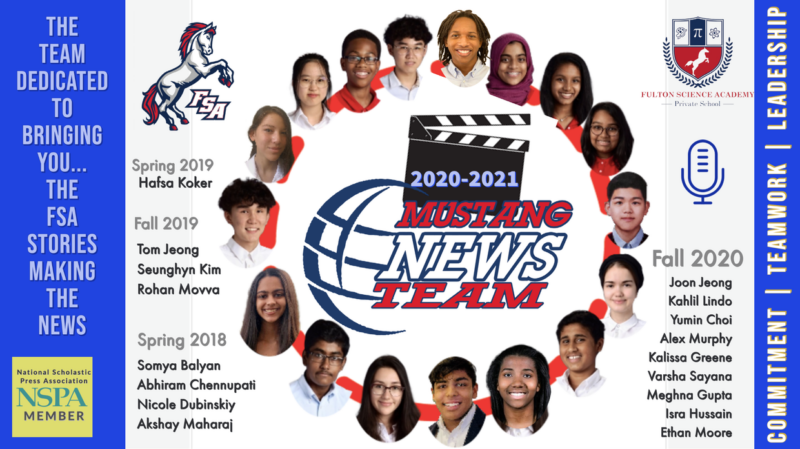 Entries in this category consisted of a single news program aired between August 1, 2020, and November 13, 2020. It was judged on overall presentation (delivery), content, editing, and other production attributes.

This past Spring, MNT captured 7th place in the Best of Show – Covid 19 category in the NSPA (National Scholastic Press Association).

Seunghyun Kim, an 11th grader, and lead video show editor, captured the 9th place spot in the individual editorial student leadership category. In this category, candidates had to submit a written statement on their leadership style and share a proud leadership moment.

The conference was held virtually this year due to COVID-19. FSA had two students attending, MNT Producer Rohan Movva and Seunghyun (Daniel) Kim. The conference was from November 19-21 and was out of Nashville, TN this year. It was a collaboration between the JEA (Journalism Education Association) and NSPA.

To participate, the production’s advisor has to be a member of the JEA and the production a member of the NSPA and be on air for a minimum of four consecutive semesters. MNT is on track to complete its third year of on-air production by the close of this academic year. You can watch and subscribe to Mustang News three days a week on FSA’s YouTube channel and Facebook page.

We are using cookies to give you the best experience. You can find out more about which cookies we are using or switch them off in privacy settings.
AcceptPrivacy Settings
Posting....